3. The exhibition
1. Premisses of the project
Tags:concours 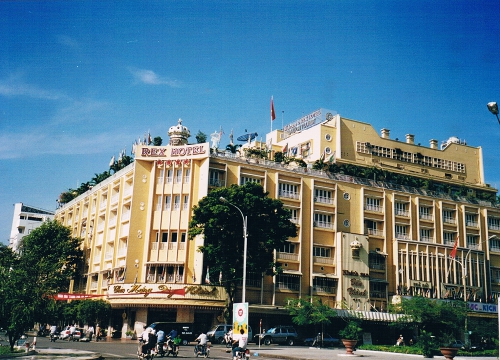 The night of 7th June 1996 will be a sleepless night because the project H & S is put on paper in HCMC in order to organize a meeting with the leaders of the Association of Fine Arts in HCMC, an administrative body empowered to discuss everything related to painting in that city.
Rex HotelEverything occurred in the hotel REX in the heart of the city, right next to the building of the People’s committee that is an amazing relic of the baroque and French period. The REX is undoubtedly the most Vietnamese of the big hotels of the city and its famous terrace « ROOF TOP » is already famous throughout Asia for its charm loan of nostalgia to which a European can hardly escape.
The project lays down from the start the main axis of the contest. These being: (a) a competition organized by the Association and an ASBL (first idea), (b) three prize of USD 10,000, (c) 20 artists to be selected, (d) a set theme, (e) one exhibition to HCMC in April 1997, (f) one exhibition in Brussels and Paris, (g) the publication of a « catalog » and (h) paintings will be available for sale with a floor price for each work, to negotiate.
The meeting will be perfect and very formal, each exposes what he can do and welcomes future collaboration but at this stage, there is little warmness because everybody is watching each other. But this will change quickly because in Vietnam, we must be patient and working in the long term by focusing on personal relationships that will be worth more than any contract.
From November 1996 and after studying the feasibility of the first concept, a second version will be proposed to the Association. The name of the contest is final this time, it will be the contest H & S (Hürner and Savary). The organizer will be the Association and IBC, the dates will be specified, the Jury will be composed of five persons including three Vietnamese artists and the artist’s choice must be made by 31 March at the latest 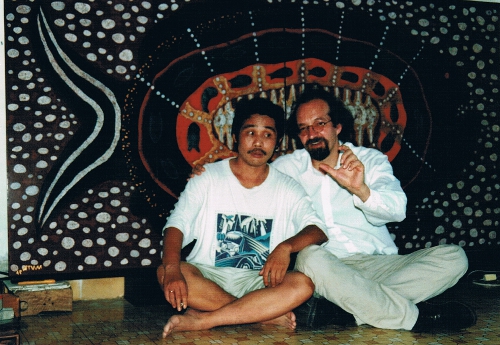 . The selling of the paintings was still topical at that time and this point will be modified only later to make this exhibition a cultural event and not a “moneymaking” exhibition.

November the 12th, Mr. Dao Minh Tri, Deputy Secretary of the Association, confirms its participation to the project. We communicate a complete draft of « Joint Venture » on the 4th February, 1997 which became, after discussions, a contract to be signed February 25, 1997. Everything is ready to progress.
The Association gives us a list of 50 artists and a whole night of discussion with some friends and artists enable us to offer a list of 25 names with difficult choices given the fact that we wanted integrate a few young artists in the project.
Finally, it was decided not to sell the paintings, which forced us, as founders of the competition to acquire them all at a reasonable cost and this was done after negotiations. Indeed, it was imperative to avoid turning the exhibition into room sales and to achieve our common goal to promote these artists abroad without any rivalry between them, the new option was needed. On February the 28th, all prospective artists gathered at the headquarters of the Association and we propose the project, with individual contracts for each artist holding the rights and obligations of each party, copyright, …
Before the end of the presentation, 19 artists had signed their contracts, others did later. The bet is won, the project is started, the artists begin to work.
Three months later, all the paintings are made and the photographic work can begin as it is not easy to « capture » the soul of 46 paintings.
This competition has had the merit of creating a healthy competition among artists who have communicated extensively with each other on how to deal with the theme: MAN AND WOMAN, an omnipresent theme in the works of these artists.

The license will be obtained on the 5th May 1997 and this time everything is really on track. However, we have very little time to « find » a sponsor / patron. Attempt will be made on the side of the Commission of the European Union but various meetings in Brussels and a meager correspondence with the Representation of Hanoi ended only to a letter of support.
My goodness! We will cope with the means at hand, especially since we had decided to give up sponsors such as « cigarette » or « alcohol », therefore there was not much more scope for as much as foreign banks are not very flexible for this kind of “cultural” project « ! We will exhibit the paintings in the same premises of the Association because the artists feel at home, they have their habits, and it is finally their party more than anyone else. If you go to Saigon, do not hesitate to jump at 218 A Avenue Pasteur, because you will certainly find one of the artists participating in the project H & S or others artists equally friendly and talented. You will see that hospitality is not a legend in Vietnam and with a smile and an interpreter, you’ll quickly be in the studio of one or the other and it is well worth the effort.