1. Premisses of the project
MH and the artists
Tags:concours

Introduction of Nguyen QUAN about the H&S contest 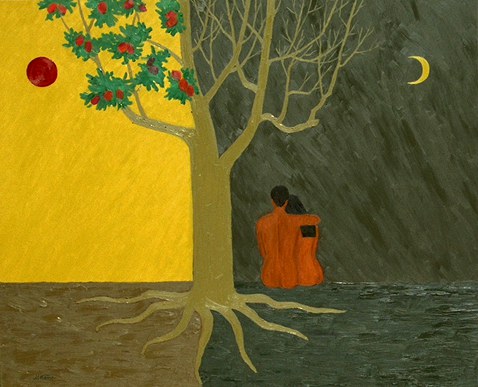 They were neither nude paintings and sculptures nor erotic pictures illustrating « pornographic literature » or sensual love, a fact so common in the West or in India, China and Japan.
The boldest tradition is perhaps that of the ethnic Chams in Central Vietnam with their cult of Linga and Yony (i.e. male and female genitals, with a veil of religious character and mysticism).
Even when present-day art in its contemporary sense, through the contact and study of French and European arts had developed jointly with romantic literature in the 1930’s and 1940’s, the contemporary artists of the first generation were still reticent about the direct treatment of the above theme.
Woman had become a major object of their paintings but they were shyly evoked in dreamy landscape and daily life, just like young ladies portrayed by the master of impressionism, the artists’ teachers.
And then came a few decades of war. 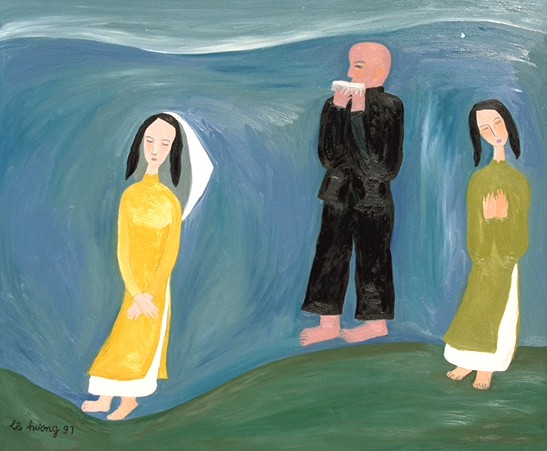 In the propagandist art of which patriotism became the predominant theme, the ‘Man and Woman’ subject existed merely in latency in the mind of the artist rather than on the surface of the painting.
At that time, nudes or sensual love though not officially banned from painting remained a taboo.
The ‘Man and Woman’ theme is also a wide subject. This is seen in every culture especially when it is viewed by the sentiments of Vietnamese arts and belles-lettres. 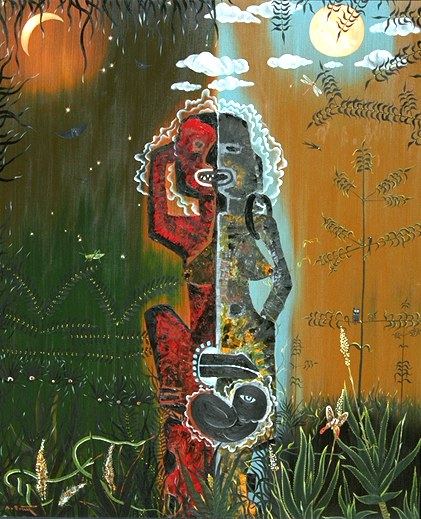 Yin-Yang, the principle that starts eternal birth and growth or regulates the harmony or conflict between man and Nature. This is also the principle of periodicity, metamorphosis and social behaviour. For Love is present in every piece of art as it is in everything in life. It is considered by the Vietnamese people as being the most vital element. Its essences, sensuality and erotism, are behind every landscape and still life.
We can quote here the poem « The non nuoc » (« The Mountain and Water’s oath ») from Tan Da, our famous poet in the first half of this century: it is both an expression of patriotism and sensual love, or the small rock named « The stone of a husband-waiting woman, well-known among Vietnamese people, and the « sewing song », praising a girl who is sewing clothes to send to the soldiers in the front, a very popular song in the period of our patriotic war.
Because of the aforementioned reasons and since artistic freedom has officially been encouraged for the last ten years, painters now have to learn to use their newly acquired freedom. They became somehow “independent” in a new framework. This framework being a rapidly changing country in relation with the application of the Doi Moi policy with massive cultural exchanges and frictions with a ruthless market economy.
The present art competition organized by the H&S Association and the Ho Chi minh City Fine Arts Association is also ambitious and challenging.
It rallies 23 artists of different age groups, tendencies and styles, focussing on a single subject and a unique medium: oil, despite the fact that some of the participants are silk or lacquer painting specialists rarely painting in oil.
The competition results in a remarkable diversity of pictures and a miniature image of the present state of Ho Chi Minh City fine Arts. 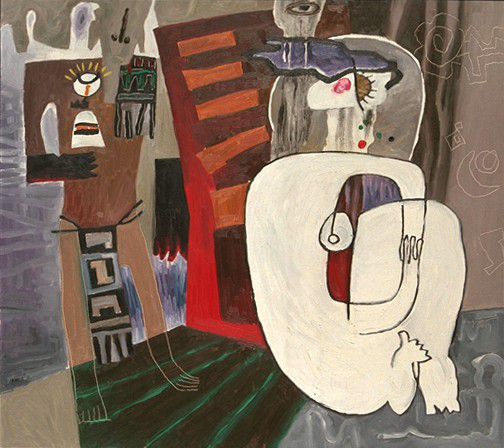 Bui Ngoc Tu, Le Huong, Phu Ha assume a folksy and fauvist look with bright colours, lines, gentle and impromptu faces.
Do Dong and Mai Truc spent days and days fighting in the jungle during the war. They have brought the feelings from these times into the landscapes they express via their usual media being silk, water colour or wood carving.
Hoang Minh Hang, Ngoc Linh and Tran van Thao with their habitual symbols such as the loving couple, the stone of the husband waiting for its wife,  pastorals…seem to waver between symbolism and lyricism.
While La Hon looks vigorous with toned down colors and angular cubist parches, Nguyen Lam, Ho Huu Thu – who are usually keen on abstract lacquer painting – have insinuated the sparkling of their series of warm, brown, toned down colours and non figurative elements into their half-figurative pictures.

Nguyen Thanh Binh and Minh Phuong seem to wander the farthest from the subject. They paint common daily activities and still lives. Apparently, they believe  that nobody could free itself from constantly recalling, dreaming of or waiting for the partner of the opposite sex. Simplicity is the most valuable thing of our daily happiness.
Dao Minh Tri directly paints on the subject and commends the primitive latent reproductive power in Man and Woman. While Mai Anh Dung and Thanh Son are more erotic with a mixture of mysticism, but the three artists are all inspired by the hefty art of the Central Highland minorities which is closely related to that of the South East Asian ethnics.
Nguyen Than
« Love story » by Nguyen Than
Nguyen Than is manifestly an Expressionist with his unaccountable burning thirst fore serenity in everyday life.
Le Thanh Thu and Thanh Lam, anew from their familiar abstract compositions proceed with combining human bodies or eyes, used as a symbolic guidance to the overview of the painting.
Ca Le Thang discovers the integration of the human spirit and body with nature. We can see fertile feminine figures in mountains, rivers and woods the same way we would see them ourselves. They are known all across the country for being immortal figures.
When I had finished my two paintings, I found then identical to the rain and sun in a small and wet garden: they are congenial to the symbols « cloud and rain » which mean sexual intercourse and to « stone and gold » signifying fidelity and purity in love. 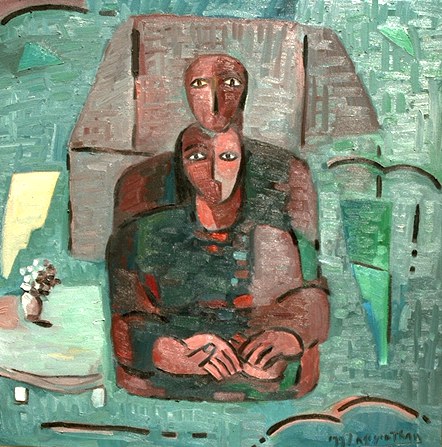 The above-cited 46 paintings show that the theme under consideration is truly ineshaustible, since it can start from the deepest and most intimate bottom of reproduction to reach the manifest expression of everyday activities.
Vietnamese painting is enjoying a growing interest from the public over the last couple of years. This is partly due to the original colours it displays and that was created over infinite exchanges between the North and the South, the East and the West. These exchanges are more and more prosperous.
Lastly, the success of this arts competition lies in the fact that all the 46 art works are created from the mood, i.e. the heart, the mind of an individual who wishes to be independent in his interrelationship with nature and the social community of the time for, as common sense has it, life can do without the over-eloquent linguistic interpretation.

written by the artist Nguyen Quan, translate in english by The Hung from Hanoi and in french by M. Hürner.