The problem of fake Vietnamese painting is not a problem in the H&S collection.

“In the late 1960s, fearing that the United States would bomb Hanoi, then the capital of North Vietnam, museum officials removed hundreds of important artworks for safekeeping in the countryside.”
« The Americans said they were going to bomb Vietnam back to the Stone Age, to wipe out Vietnamese culture, » says Nguyen Do Bao, chairman of the Hanoi Fine Arts Association, who was a young museum staffer in 1966 when the first B-52s appeared overhead.
“To replace them on the museum walls, it commissioned copies: some by the original artists, some by the artists’ apprentices, some by skilled copyists in the museum’s restoration department. They were brilliant reproductions — or variants, as the Vietnamese called those paintings copied by the original artists.”
“The artworks were supposed to return home after the war. Not all did. Records, if they ever existed, were lost. In cases where an artist had copied his own work, it was not always clear which was the original. And to complicate matters, in the difficult postwar years, the culture of copying continued. The museum loaned paintings to starving artists wanting to copy their own works to sell, contributing to the problem. Did the artist return a copy to the museum or the original? And if the artist makes a copy of his or her own work, can it be called a fake?”
“In some cases it was apparently not even clear whether the originals or their copies were sent into hiding, said Nguyen Do Bao, the former chairman of the Hanoi Fine Arts Association, who delivered the paper that gave rise to the controversy at the copyright conference in April.”
“But now “it’s a disaster,” said Bui Thanh Phuong, the son of Bui Xuan Phai, a prominent painter. “Viewers can’t be sure if what they are looking at is genuine or fake.” Mr. Phuong said he does not know which of the museum’s seven paintings attributed to his father, who died in 1988, are real.”
“Additionally, poor management of Vietnamese art works led to mass production of fake arts and fake duplicated paintings. The post war relationship and the fake art period contributed to destroy Vietnamese art credibility. One of the most popular events was the fake art auction in Hong Kong and Singapore (‘A Girl in Garden’ by famous painter Nguyen Gia Tri advertised on the Asian Art News in Singapore, while the painting was being sold in Hong Kong market). This period negatively affected the culture of Vietnamese lacquer art specifically and all forms of Vietnamese arts as a whole.”
“The worst aspect for Vietnam art now is fake artworks and the law is not strong enough to prevent this phenomenon. In Vietnam a gallery selling fake paintings has to pay only a several million dong fine while in other countries the gallery would be closed.”
“Also bad for talented artists are the regulations by the Ministry of Culture – Information issued in 2004 allowing copying of paintings in the country. Vietnam art now faces the big challenge of the market mechanism.”
“In addition, Ms. Taylor said, Vietnam has never had a strong culture of documentation and proof of provenance. Classic works have been reproduced without concerns for authenticity in order to display them more widely.”
“The proliferation of copies is hurting Vietnam’s once hot art market. Taylor, the art historian at the Art Institute of Chicago, says younger artists who made a living by copying are starting to worry that the practice that once benefited them is now hurting their prospects. Even if making copies was not originally intended to deceive, the situation is so bad now that no reputable museum will borrow from Vietnam’s national art museum, Taylor says. « The biggest damage is that now Vietnam has a bad reputation, » she says.”

The problem of distinguishing the real from the fake

Recently, the Vietnamese world of art has been once again shaken by a scandal of fake paintings.
“The exhibition in question was featuring 17 art works by the four most influential painters in 20th century in Vietnam : Bui Xuan Phai, Nguyen Sang, Duong Bich Lien and Nguyen Tu Nghiem. The paintings were being showcased in an exhibition titled ‘Paintings Returned from Europe,’ running from July 10 to 21 at the Ho Chi Minh City Museum of Fine Arts.”
“These famous paintings were collected by antiquary Vu Xuan Chung. Chung bought these art works from Christie’s senior consultant for Vietnamese art, Jean-Francois Hubert at the leading international auction house, Christie’s.”
“HCM City Fine Art Museum gives a public apology for displaying 15 forged paintings among 17 masterpieces exhibited. The remaining two paintings were still signed with the false names, Ta Ty 52 and Nguyen Sy Ngoc.”
The art dealer of the works, Jean-Francois Hubert of Christie’s, offered up an image of Ta Ty and the painting as proof of authenticity. However, the painting in the photo appears to have been Photoshopped. It is by the way obvious to the common people that the painting was added as the painting does not obey to the basic perspective rules. 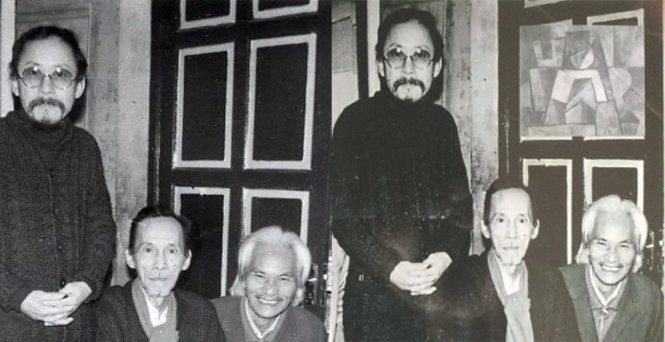 Well aware of the problem of copied paintings in Vietnam, Marc Hürner took great care of meeting directly the artist that participated to the contest. He met them at their house, ate and drank with them, laughed with them. Fantastic evenings were spent between these men speaking about arts, culture difference, and history.
To assure the trueness of the collection and have a long life proof of the authenticity of these paintings, Marc Hürner took many pictures of him with these great artists and their works. But, at the contrary of the photoshoped image seen above, these pictures are real as the bond created between these men in the frame of this unique experience. 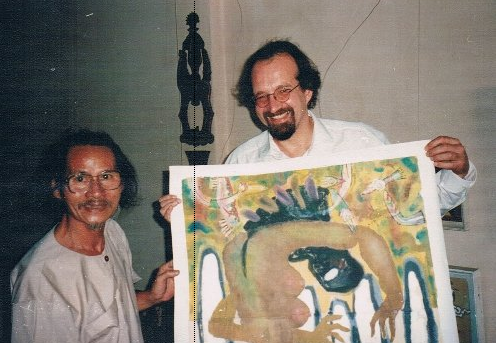 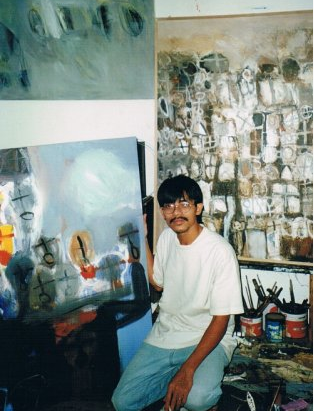 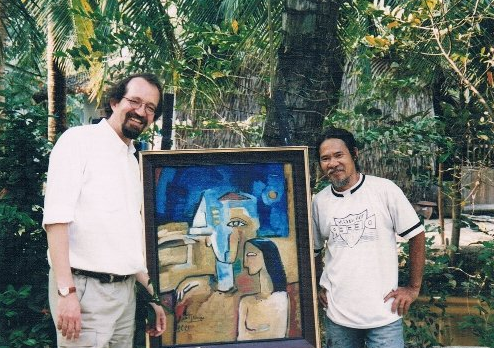 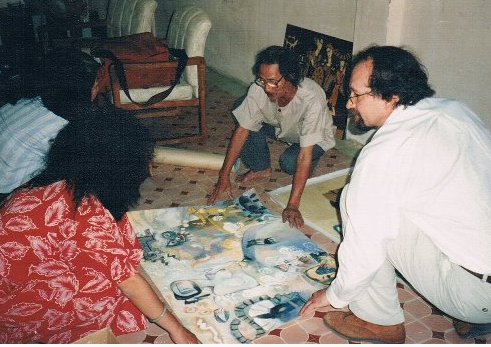