Ca Le Thang
The specificity of the vietnamese painting 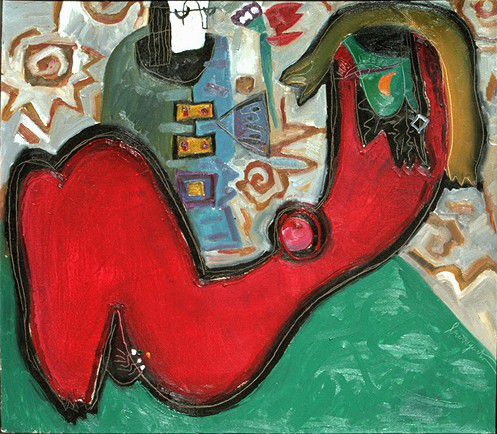 Bui Ngoc Tu is born in 1936 in the small village of Nam Dinh in the North.

He has graduated from the famous Hanoi Fine Arts School in 1969. He made a lot of paintings’ exhibitions in Vietnam and in Russia, in India, in Poland, in Sweden, in Switzerland and in 1997 & 1998 in the H&S Art Gallery in Brussels.Bui Ngoc Tu

This artist is well known for his paintings describing the traditional life of country people. His works on paper are marked by a particular humour which gives his characters a touch of naivety and tenderness making them moving and poetic.

However, since a few years, Bui Ngoc Tu is trying to paint his personal view of the primitive and complex man-woman relationship. Woman is always at her advantage, in full possession of her female attributes, except for the head when she is desired and aware of this feeling. On the contrary, Man is unfortunately reduced to a draft, if not a child or a clown because he is put down by this vision of a Woman with infinite resources. Little by little, Bui Ngoc Tu’s work is changing and the man appeared more sexual and is starting to openly desire this “obscure object of desire” as filmed by Buñuel in 1977.

Bui Ngoc Tu is painting large works painted with large strokes. Nowadays he is suggesting more than he is painting. He is willing to stylise at the best a language he would like universal and to represent the inexpressible anxiety of Man in front of a Woman. Everybody sees itself in his work. This period of symbolism creation was particularly rich and it has progressively been replaced by a return to traditions.

Bui Ngoc Tu has a special place in the Vietnamese contemporary painting. He is working all the time and is out of the turmoil created by new collectors & art dealers coming from everywhere. Very modest but extremely rich inside, his work will impress more and more art lovers from all over the world. Bui Ngoc Tu is one of the very few true giant in Vietnam

In recent years, he seems to have returned to the works dedicated to village scenes and he devotes considerable time to produce works painted in large format. His references to folklore and country traditions make out of him an attaching painter much appreciated by Vietnamese collectors.