The chemistry of the three influences 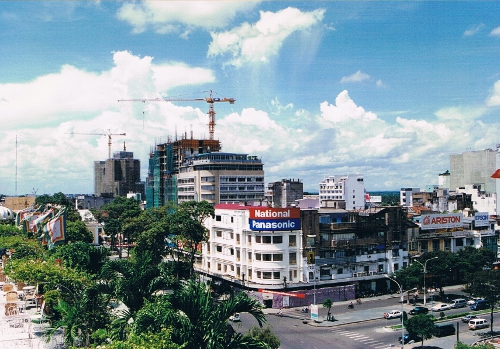 It is stupid to write an artist does not live beyond its time because it is obvious. However, we must insist on this fact to understand the differences, accept them and put a stop to incessant comparisons between what was happening yesterday because this relates to an incongruous cultural imperialism at the time of globalisation. Each Vietnamese artist can not escape to the combination of three interacting factors either (a) the weight of war and a very close past that brought suffer and images of death, (b) an undeniable cultural heritage of a French « academic » painting, and (c) a religious pervasiveness of the ancient, himself being the synthesis of mixed ancient influences of Hinduism, Buddhism, Confucianism, and secular traditions.

If we add to all that a specific climate with two or four seasons depending on the region, a very strong dominant ideology but in evolution, it is undeniable that the Vietnamese artist has a specificity that makes him all the more extraordinary that Vietnam is present in the collective unconscious of many generations.

A. The weight of an endless war

Without going back to the dawn of time, remember that it’s on the 2d September 1945 that Ho Chi Minh declared unilaterally its independence in Hanoi when the Japanese left the country.
This will be the beginning of a long struggle for independence, the legacy of a colonial misconception already in full agony following a catastrophic world war for the old Europe.
The Fine Arts School of Hanoi closes and leaves – if we can say so – in the luggage of Ho Chi Minh who joined the resistance movement.
At first, it will be the cruel and how useless war when seen with our eyes of 1997, a war of decolonization that will end in the sad and bloody victory of Dien Bien Phu in 1954. There will be little respite for the French will be immediately replaced by others in the context of Cold War that we must keep in mind to understand fully the drama of the « Vietnam War » that will haunt ( » squatter « ) televisions and minds of the world until 1975. This date of the American departure will leave a bitter taste. This technical victory for Vietnam will be heavily sanctioned by the US from an economic standpoint because it will never forget this failure from a history it never really wanted. Therefore, Vietnam and its people will be “banned” from the free world for nearly 25 years.
This war pursues us on the big and small screens with memorable and tragic movies such as Oliver Stone’s PLATOON and more precisely this tragic scene including the abandonment of the hero with music by Barber, a great moment of cinema, strong images, a tragedy written forever in our memories. 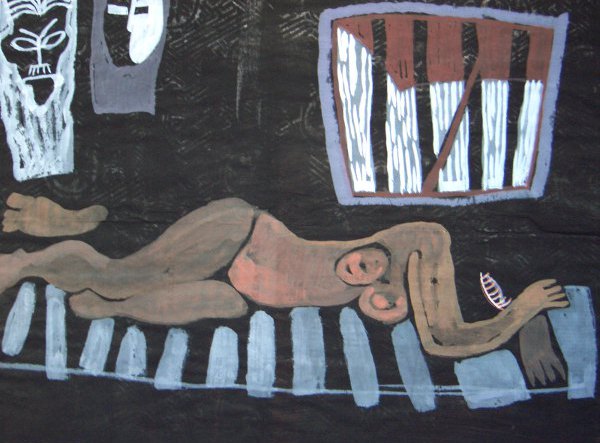 It is not until the late eighties that the leaders of this country, aware of the changing geopolitical issues with the total collapse of the communist countries of the Eastern Block, will resolutely and wisely change course to move towards a pragmatic communism accepting – like the Chinese economic model – an economic opening towards market economy. The system is changing fast, attitudes and also the Vietnamese people will quickly adapt to this new situation by going head first into that direction.
This is the DOI MOI POLICY, creators, and especially the artists who will release a creative energy contained for years to give birth to an amazing anthology of works that has not finished to be discovered, far from it.

B. An undoubtedly French cultural heritage 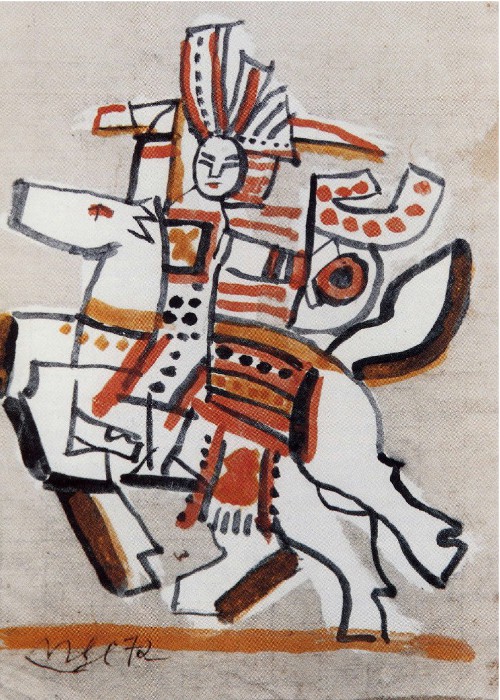 For reasons that it is not useful to recall, the colonizing power in 1925 will decide to open a Hanoi College of Fine Arts that will allow local artists to benefit from an educational pictorial style « academy » very useful. The « classical » French painter Victor Tardieu and Joseph Imguimberty were those responsible for this mission. While French painting, European we would say now, was exploding in various directions after a terrible war and a cubist past (already) that will mark modern art  towards extraordinary movements (Dadaism, Surrealism, Futurism … ), young Vietnamese painters discover a more traditional teaching. These young artists will in turn become teachers and the earth from which will spring forty years after World War II the generation of the best contemporary painters.
We will quote for the record Bui Xuan Phai, Nguyen Tu Nghiem, Ta Ty, Nguyen Sang, Do Quang Em, Tran Luu Hau … amazing and daring painters that have developed in difficult historical circumstances a well marked individual specificity but they already belong to a history of Vietnamese art yet to be written.
Thus, there is an undeniable cultural specificity although some Vietnamese artists are still struggling to accept it, as the weight of the past (painful) is heavy to bear, giving rise for some of them to a real desire to break away invisible chains. There is still much to do here in this area suggesting new interesting creations to follow. 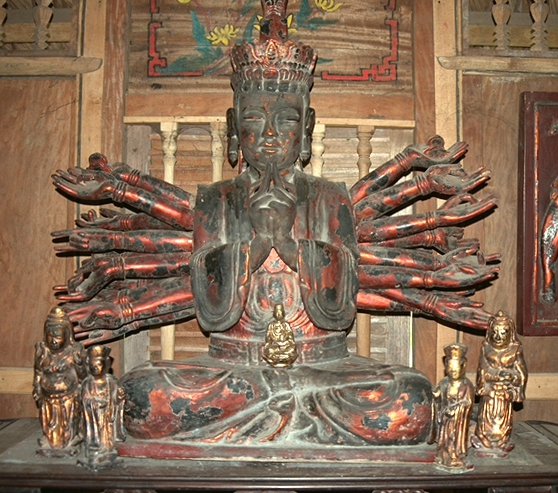 The third ingredient in the alchemy that will mark to some degree every artist is its level of religiosity.  It means  the degree of his dependence towards secular beliefs and specifically Vietnamese. The weight of tradition is huge in Vietnamese society.
Despite so many years marked by a socialist and materialist ideology, the Vietnamese people remained attached to the ancestors and numerous beliefs – if not infinite – in divine signs and symbols found in each house (small altar to the ancestors who is cleaned with fervour) in each village festival and testimony from the past in each history’s witness.
Yes, there is a tradition in Vietnam, a huge sense of family that we hardly perceived in Occidental Europe, a set of invisible links that perpetuates the ever-living and the dead, a sense of Continuity that is a complete break with our European fund of Judeo-Christian guilt culture.
Each artist is subjected to varying degrees of this triple influence, particularly in the light of his own existential reflection, a critical variance in the understanding of works of each artist. It is futile to attempt, as part of this modest work, to analyze these variances but analyzing some works of Nguyen Quan and Bui Ngoc Tu is enough to perceive the huge gap between these two artists in this very personal variance.
Add to that the great influence of the climate (cold and highly variable in North Vietnam and tropical in the south alternating with two seasons) and the impact of a very present ideology from an existential point of view in its “expressionist” component (meaning « ability to express aspirations « ), and we understand that there is definitely a Vietnamese specificity in art in general, especially painting. Without dwelling on the delicate subject of artistic creation in a « revolutionary socialist » world, we must recall the fate of Kasimir Malevich (1878-1935) and its supremacist movement (the reality in art is the effect of color itself) poorly adapted to the new aesthetic power in Russia (see Herbert Read « A concise history of modern painting – World of Art, Thames and Hudeson, Pages 210 et seq.)
Thus, there is a latent determinism than most artists whose « think » will be marked. This is where we must integrate the explosion of DOI MOI liberating to appreciate the unique nature of creative phenomenon we are witnessing in Vietnam for the last 20 years.